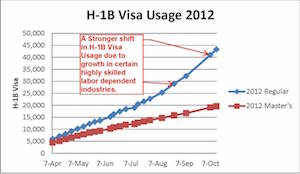 The H-1B visa cap experience in calendar year 2011 has been a remarkable copycat performance of last year and the year before that. Unlike prior years where all cap-subject 85,000 H-1B visas were consumed in one day (April 1 or shortly thereafter), the last three years have shown a screeching slow down for H-1B visa usage with visas available well into Christmas and New Year’s. This experience is shared by Columbus immigration lawyers alike. For instance, as of October 14, 2011, there remains more than 20,000 new H-1B visas available this federal fiscal year.

I have been closely monitoring the H-1B visa usage during the last three years and have noticed a remarkable similarity in the rate of its consumption. This is indicative of a stagnant economy and one where reliance on highly skilled foreign labor has decreased when compared to 2008 and prior years. An examination of the H-1B visa usage since July 2011, however, shows a stronger absorption rate than was experienced in the prior two years indicating a possible growth in certain industries which rely on highly skilled labor. 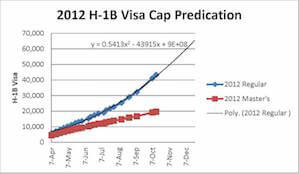 In examining the rate of consumption this year, two patters emerge: one from April to July and another from July 2011 onward. The rate of consumption from April to July 2011 was more linear with approximately 700 to 900 new petitions received by the USCIS on a weekly basis. From July onward, however, the rate of consumption appears to have jumped to an exponential curve with an increasing rate of consumption weekly to 2300 H-1B visas between October 7 and October 14, 2011. Hence, there appears to be a rush to acquiring new H-1B visas as the year nearing to end. If you compare this rush to acquire highly technical labor against the overall US job growth, one certainly gets confused; the US has reported a disappointing zero job gain in the second quarter of 2011. But in examining employment data released by the US Bureau of Labor Statistics on October 7, 2011 covering the period ending September 30, 2011, one finds that there has been measurable growth in education, construction, healthcare, telecommunication, manufacturing and consulting services. Those industries grew by about 500,000 workers between August and September of 2011.

While the H-1B visa experience in 2011 shows a remarkable similarity to the two prior years, there appears to be a strong shift for more consumption in the third quarter of 2011. A closer examination of certain H-1B visa dependent industry employment figures shows a sudden growth in the its employment figures during the third quarter of this year. We certainly hope that this trend continues to hold true moving forward in 2012.

The immigration attorneys at The Law Firm of Shihab & Associates and Gus M. Shihab are uniquely equipped to represent companies in highly complex H-1B visa and immigration processing. Contact us for an evaluation of your case.