Bipartisan legislatures in both Republican and Democratic-leaning states have recently enacted legislation that would advance state-based immigration reform. With the failure of both the Bush and Obama administrations to pass a comprehensive federal immigration reform package, states are now leading the charge to create their own individualized foreign guest-worker programs.With the approval of Congress, a federalist approach could further strengthen the economy by filling critical state-specific labor needs, while giving industrious foreign workers at all skill levels a chance to work legally in the United States, and eventually pursue a path to permanent residency or citizenship.

If you were to compare the state-based approach to our current federal approach for guest-workers, it would be like comparing a from-scratch, local-ingredient sourced meal prepared just to your specific tastes–with a warmed-up, from-the-freezer takeout meal from a national chain restaurant, where the limited menu is the same everywhere.

State-based immigration reform has so far been pursued by a growing number of states: Arizona, California, Colorado, Georgia, Kansas, Massachusetts, Oklahoma, Texas, and Utah. California, for example, would grant guest-worker visas for undocumented immigrants already living in California.Utah would also allow undocumented workers to stay, granting them the ability to apply for a two-year guest visa. Texas would not legalize any undocumented workers, but would allow for more legal migrant workers to enter from Mexico. A stronger Mexican economy in recent years–along with aggressive border enforcement–has led to a near 0% net increase in undocumented immigrants in the U.S.This has led to a critical shortage in many local industries such as construction, cleaning, landscaping, farming, fishing, restaurant, and service industries.

For highly-skilled foreign workers, Massachusetts has created an innovative program called the Global Entrepreneur in Residence Program.This program allows universities to sponsor an entrepreneur-in-residence as a university H-1B employee, allowing the foreign entrepreneur to obtain an H-1B visa.

Other federal nations have taken even bolder steps. Canada, for example, has experimented with delegating some of its authority over immigration to its provinces under the Provincial Nominee Program.This program grants each province an annual allowance of permanent residency visas based on population.Provinces may grant the visas for whatever reason they choose, but they are normally used to fill critical province-specific labor shortages.The role of the federal Canadian government under this program is to simply enforce the national security, health, and safety requirements.This program has achieved considerable success, with 96% of the immigrants in western provinces finding employment within a year.This program allows Canadian federal authorities to focus on what they do best, and gives the local governments control over the local concerns that affect them the most.

Here in the United States, we should allow states to experiment with different kinds of guest-worker programs that meet their local needs, and that offer hardworking immigrants a path to legal work and presence within the U.S., rather than give in to xenophobic anti-immigrant policies and rhetoric that would close our borders. Since immigration regulation is an exclusively federal power, Congress must pass a statutory framework to allow states to create their own temporary foreign-worker programs.
One example of state-based legislation, would be for the federal government to give the states an allowance of visas every year based on population to fill critical labor needs. These visas could be renewed indefinitely, and eventually foreign workers would be eligible for permanent residency.Visa holders would not be tethered to a sponsoring employer, but would be able to seek employment anywhere within their state.Each state could individually tailor their visa program to meet their own local needs: California, for example, could offer more visas for high tech workers and agricultural laborers, while Michigan might focus on construction workers and real estate investors.Many different kinds of visas could be created that would be in harmony with actual local priorities, instead of a federal one-size-fits-all visa approach that can be excessively burdensome and restrictive. 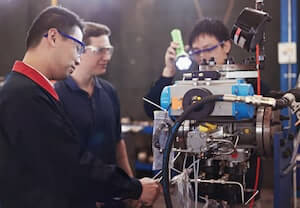 Some may argue that allowing states to issue visas could lead to foreign guest workers “overstaying” their welcome, or leaving the state to work in another state they are not authorized to work in.However, only about 2% of visa holders who overstay their admittance are guest workers. Most of those who overstay are vacationers and tourists. Guest workers often have too many responsibilities and incentives to be employed legally and to comply with their visa requirements.And for oversight, the states would be in a better position to experiment with prevention and response to any visa violations, because they are more knowledgeable about and concerned with their local needs. States could implement employee bonds or withhold wages that would be repaid when the foreign worker leaves or changes status.States could also set locally-reasonable employer fines and establish voluntary compliance programs. States could better monitor employer treatment of employees, and the abuse of guest-workers could be prevented by issuing them an intra-state visa, instead of tying them to a specific petition-sponsoring employer.The federal agencies could free themselves to focus on what they do best: to process naturalization petitions, and to investigate and monitor health, safety, and national security concerns.

In the absence of comprehensive immigration reform that would ease restrictions on guest-workers at all skill levels and strengthen our economy, an attractive alternative approach is state-based immigration reform.The states could best experiment in 50 different laboratories for democracy, handcrafting local immigration packages that would be “artisanal local brews”–instead of the generic, mass-produced, and bland-tasting “light beer” immigration model we now follow.