The City of Columbus took a bold move and passed a non-binding Resolution to urge Congress to pass Comprehensive Immigration Reform. The following is a verbatim testimony of Attorney Gus M. Shihab before City Council on June 21, 2010 in favor of passing this resolution.

My name is Gus Shihab. I have been an attorney in private practice here in Columbus, Ohio for more than 17 years. My area of practice is immigration and nationality law. I have represented thousands of clients during my career in all facets of immigration law. I also hold the position of Ohio Chapter Chair for the American Immigration Lawyers Association (AILA). I would like to tell you a little about AILA. AILA is a national bar association of immigration practitioners having 11,000 members nationwide. In our Ohio Chapter, we have about 240 member lawyers; about a hundred of those member lawyers are located in Columbus. Collectively, our member lawyers represent several thousands of immigrants and their families.

President Pro Tempe Craig, Ohio is home to 350,000 foreign born individuals. In Columbus, ten percent of our City’s population is composed of foreign born individuals compared to only 4.5 percent in Cleveland and 3.8 percent in Cincinnati. This comes as no coincidence as the City of Columbus has proudly stood tall among its sister cities not only in Ohio, but also nationwide as an example for ethnic diversity. 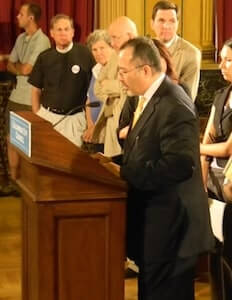 I Thank City Council for passing this non-binding resolution which will accomplish two things: 1) it will send a clear signal to Congress that the Citizens of the great City of Columbus demand Comprehensive Immigration Reform which reinforces our longstanding American tradition of fairness and family unity; 2) remind Senator Tim Grendel of Cleveland, who recently requested the Ohio Senate to join him in drafting ethnic profiling legislation molded after Arizona’s SB 1070, that the Citizens of the City of Columbus will not join in.

Members of the Columbus City Council, I would like to remind you of the demographics of foreign born individuals living in our midst. They are persons who have come to Columbus to be united with their loved ones or to find a better future for themselves and their families. They are two types, some come in through legal means and others enter the United States without inspection. The latter population we call the undocumented immigrants. But these undocumented immigrants mostly entered as unskilled workers to occupy position in the dairy, agricultural, construction, and hospitality industries. They provide badly needed services in a segment of our labor market that US workers are either unwilling or unavailable to occupy.

I see these individuals in my office frequently and without exception, every one of them wants to be documented but our current immigration laws do not allow them to do so for the most part. This is because our current immigration laws do not have a category for unskilled laborers that can be utilized in a scale as dictated by the market place. In essence the immigration laws’ failure to recognize the demand that we have for unskilled labor has placed these individuals in a catch 22: they were attracted to our communities through the natural forces of supply and demand and are now denied the opportunity to be in the US legally.

Members of Columbus City Council, I thank you for passing this resolution demanding that Congress pass Comprehensive Immigration Reform through earned legalization:

It has been documented that immigration reform will improve the US economy as the population of undocumented immigrants will invest into America by buying homes, cars, property and other goods. A study conducted by UCLA Comprehensive Immigration Reform will increase the Gross Domestic Product (GDP) over 10 years.

I thank you for your efforts in passing this resolution and I will be more than happy to answer any questions.