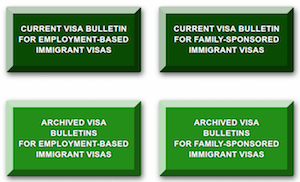 When a foreign national (FN) begins the immigration process, his or her case will be assigned what is called a priority date. This date is generally the calendar day Citizenship and Immigration Services received the original immigration petition–and represents the FN’s place in his or her line. In both case types, employment-based (EB) and family-sponsored (F), there are several legal avenues or methods an FN can use in an immigration petition. These legal avenues are formally known as “preference categories.”

For the purpose of this explanation, it will be productive to say that in each of these categories, there are five “pathways” to receiving permanent residence (or “a green card”). The pathway used is determined by the nationality of the FN, and there is one for each of the four oversubscribed nationalities of India, China, Mexico, and the Philippines. The last one is for all other nationalities. If a nationality is oversubscribed, it is bumping against the annual universal per-country limit.

The metaphor of five pathways in each preference category (of both case types) is useful because it allows the further metaphor of “lines.” Some pathways aren’t used very often, so they don’t have lines to get through them, but popular pathways do. Thus, how long an FN must wait in line to use a preference category (to get a green card) depends on his or her national pathway. Each preference category has its own annual limit as well, so if an FN’s petition falls into a category that isn’t at its limit–and he or she isn’t of an oversubscribed nationality–the only waiting time will be how long it takes the government to consider the case. There would be no line in the pathway.

But for most FNs, there is a line to use their national pathway to permanent residence. This is where priority dates come into play. For each national pathway that has a line, the Visa Bulletin lists a “priority date cutoff,” and only those that have priority dates before the cutoff date can petition for permanent residence. To continue the extended metaphor, the lines advance using a system similar to the one often employed in delis and the BMV/DMV. It is the one in which customers receive a number ticket and wait for it to be called out by a worker. If FN priority dates are the numbers on the tickets, the priority date cutoff would represent the number that one’s assigned number must be lower than to receive service.

A pathway’s cutoff is the priority date of the first immigrant that couldn’t be given a green card due to a numerical limit. In a perfectly stable world, the priority date for each line would likely advance by one month in each monthly Bulletin. However, the real world is far from this ideal. In fact, sometimes a priority date cutoff will retrogress further into the past. When this occurs, some FNs who were able to petition for permanent residence have temporarily lost this ability–and will have to wait even longer.

This happens because of the government’s goal with the Visa Bulletin. Instead of handing out green cards according to how long FNs have waited, the government’s legal objective is to fill every category without violating numerical limits. FNs from oversubscribed nations filing in popular categories are sometimes made to wait longer so that other FNs from the same country–that are applying in less frequented categories–can get through. Those in the more popular categories can be replaced with FNs from other countries. However, those in the less popular categories often can’t, getting them a fast green card at the expense of their countrymen.

This is also why some Filipinos and Mexicans have waited many years more than other groups in F cases but experience the same or less waiting time than them in EB cases, which is often none. It’s true that the government could make the (somewhat few) EB Mexicans and Filipinos wait (longer) so their F counterparts wouldn’t have to wait as long. But since all F categories are at their limits, FNs from other countries with family-sponsored cases would have to wait longer in the exchange. While not perfect, this would seem a little fairer.

However, it is the government’s opinion that doing this would not be in the U.S.’ best interests. The only possible use for the EB green cards saved (by making the EB Mexicans and Filipinos wait longer) would be for them to go to the non-oversubscribed national pathway of the EB category for somewhat less attractive workers. Theirs is the only EB category where this pathway has any waiting time. (It is the only one at its annual limit). But that pathway’s priority date cutoff has already made it to 2014, so its ability to make use of extra green cards is minimal. Making EB Mexicans and Filipinos wait more than a negligible amount of time would cause disuse of EB green cards and make F green card distribution no fairer.

But more importantly, moving things around like this could create unwanted vacancies in other EB categories or violate other regulations. In truth, there is little the government can do to change how it handles immigration without a change in the law. It is true that the Visa Bulletin can appear like a bureaucratic nightmare. But when one considers the complexity and rigidity of immigration law, it looks more like an elegant mathematical formula.